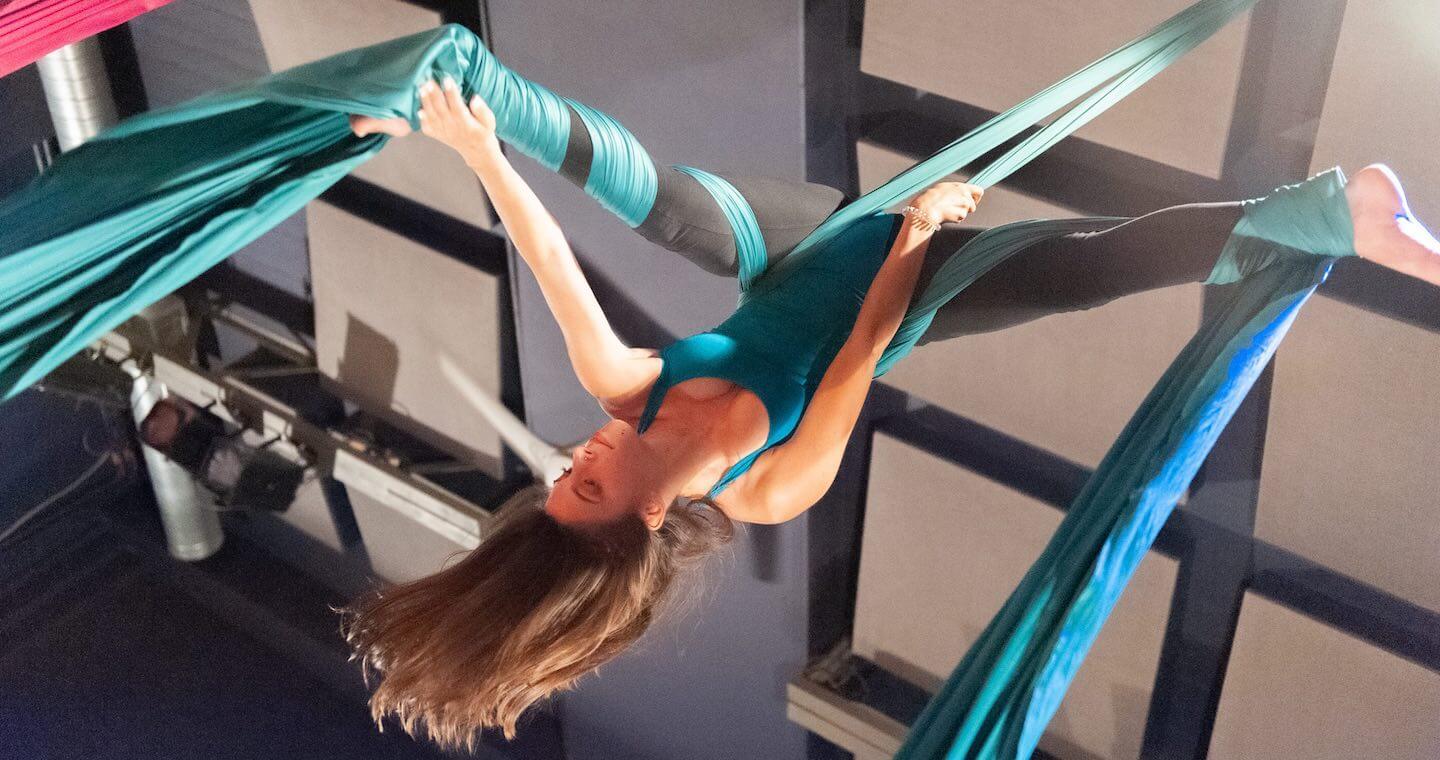 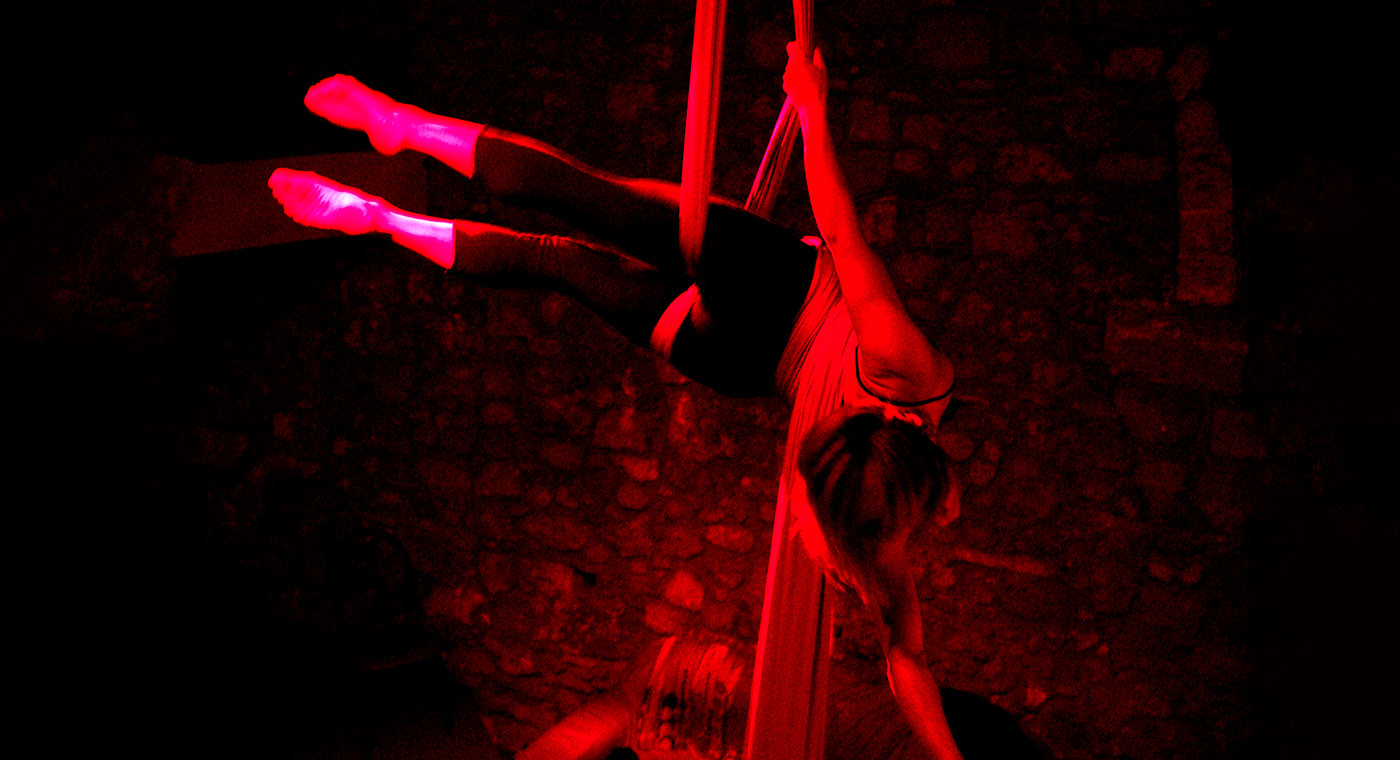 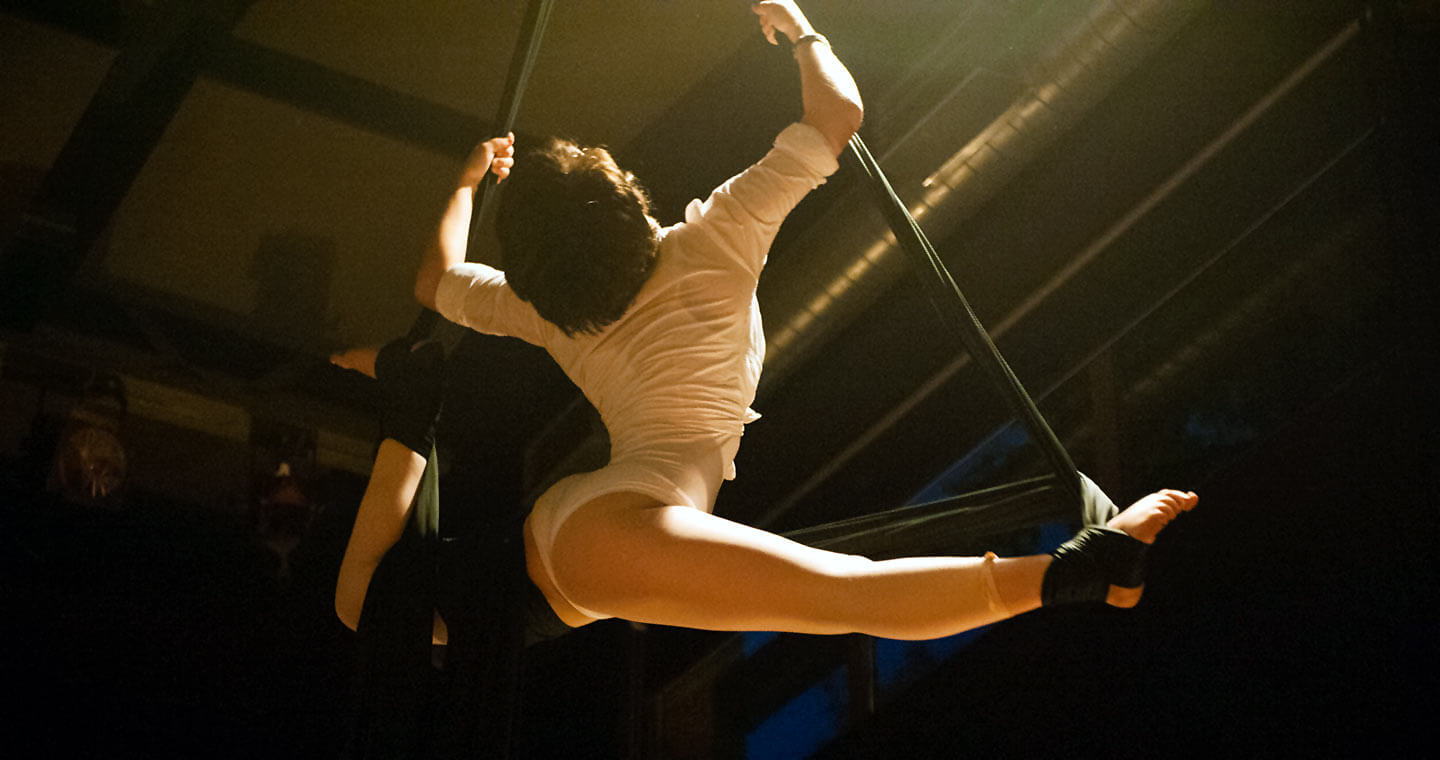 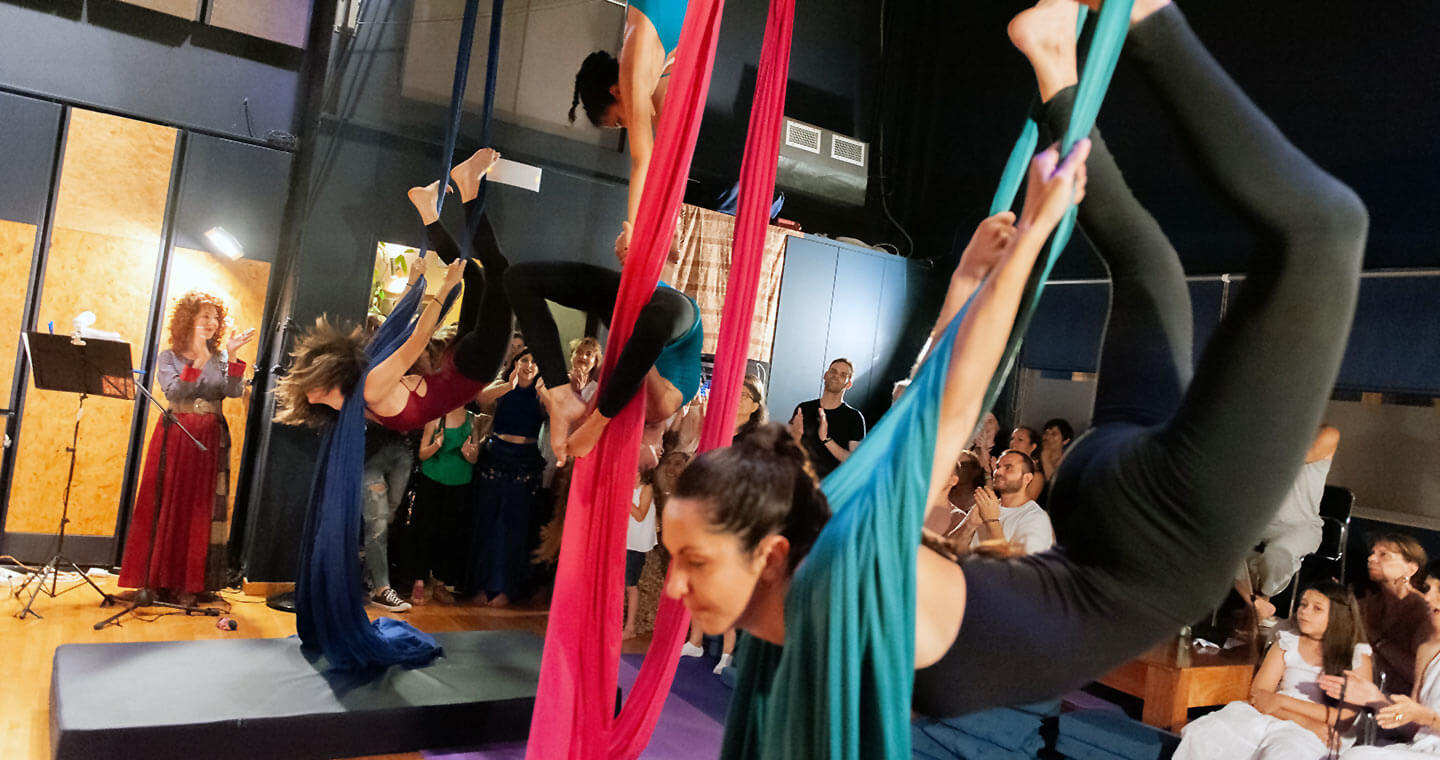 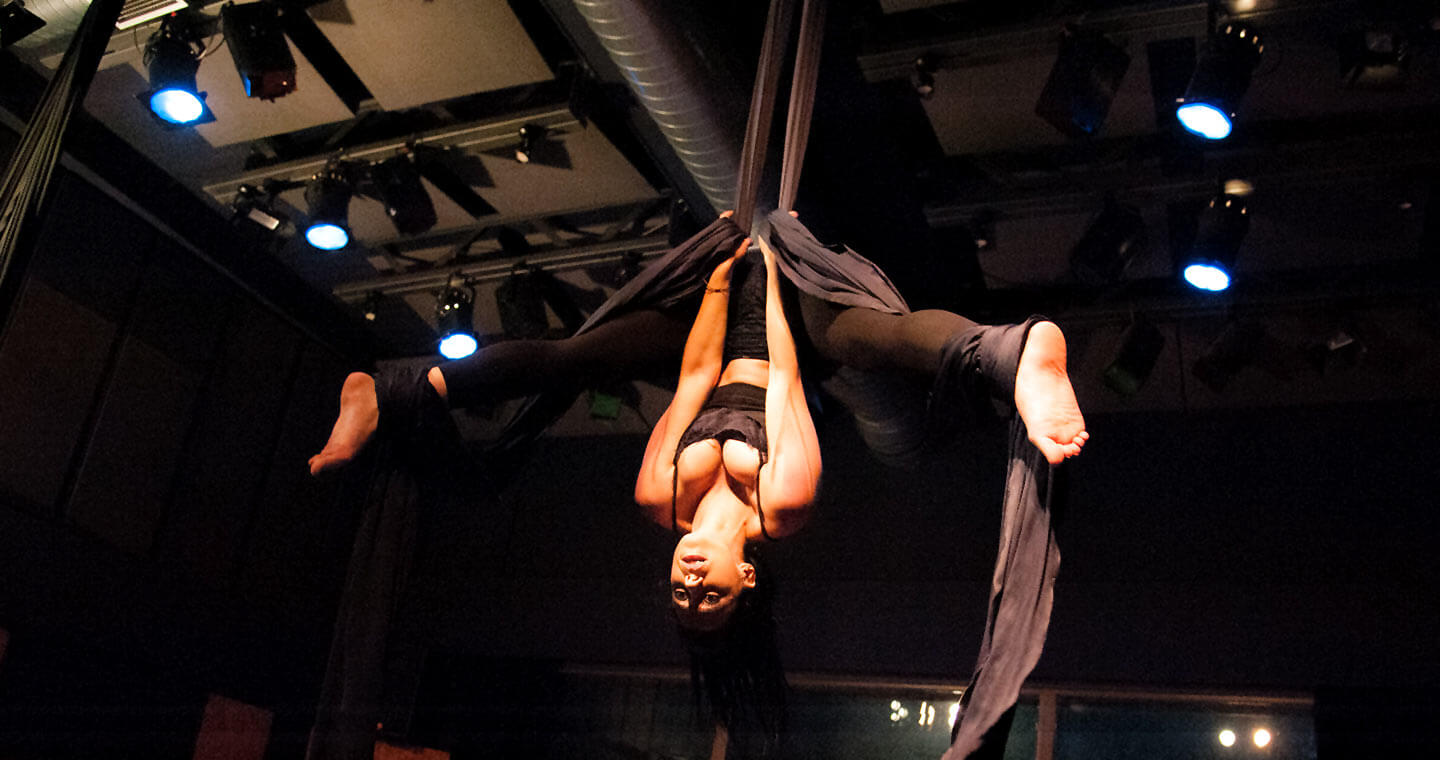 Aerial Acrobatics with silks and hoops

Aerial acrobatics with silks and hoop are a relatively new circus art form with only 30 years history, but its roots are very ancient.

What is remarkable, however, is the huge appeal they have had in recent years at an amateur level. And this happens because aerial movement is completely natural and in harmony with the capabilities of the human body. The hands slowly get used to lifting our weight and then a whole kinesiological horizon opens up, without limits, with the fabric becoming an extension of the human body.
The aim of the lessons is to create aerial kinesiology flows focusing mainly on the capabilities of each individual. Through technical and strengthening exercises, we will offer the body a complete preparation, so that it can express itself in the air with clean lines!
The course is aimed at all ages and at those with no previous experience with aerobatics.

The first part of the lesson will be dedicated to strengthening exercises and movement patterns on the floor, while the second half will focus on the creation of aerial technique, as necessary tools that favor and lead to the last part of the lesson, where an effort will be made for an integrated composition, creating each time a movement combination based on the uniqueness of each student's body and expression.
The class takes place in Shantom's large hall, next to the garden, with a 5.5 m high ceiling and special high-standard construction for safe exercise. Techniques taught include climbing on the fabric strips, wraps, foot locks, poses and drops.
The class is meant for people with good physical condition. 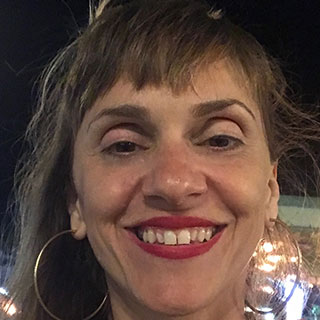 She was born in Athens. She has a degree in German language and Literature from the National Capodistrian University of Athens, in Social and Political Anthropology from the Panteion University of Athens as well as in Intercultural Education from the Freies Universität Berlin. Since 2007 she is a professor in Secondary Education.
She has participated in a competitive rhythmic gymnastics team and has attended classical-modern dance classes and seminars from many dancers and coaches.
Through her involvement with dance came love and curiosity for the circus. She got acquainted and involved with circus while in Berlin, at the Center For Performing Arts “Katakomben” and attended classes and seminars of aerial acrobatics by distinguished dancers in Greece and abroad (among others Alex Allan, Will Davis, Emiliano Ron, Sarah Bebe Holmes, Gabriel Tramullas, Tyrone Herlihy, Dream Frohe, Myrto Petroheilou, etc.).
She has participated as a performer of acrobatics and aerial acrobatic with silks and hoops in performances in Chania and Athens in various venues including Athens Festival, Technopoli, Badminton Theater, Olvio etc. She has been teaching aerial acrobatics since 2009.